It is envisaged in the revised National Energy Strategy on October 10, 2002 that Unit 2 of the Ignalina NPP is to be shut down by 2009 provided that financial sources are available and the necessary funding based on agreements with EU institutions and other donors. Lithuania committed herself to shut down the reactors considering that at later stages of EU accession negotiations the issue of additional financial support for the premature closure of Unit 1 at INPP by 2005 and Unit 2 by 2009 was adequately dealt with.

The EU members have admitted that the decommissioning of INPP will take longer than the present financial prospects allow and that it is an excessive financial burden to Lithuania incommensurable with its size and economic power. The EU countries declared that being solidarity with Lithuania they are prepared to continue additional financial support of the EU for the decommissioning efforts after Lithuania becomes a member of the EU.

On 20-21 June 2000, the conference of international donors who have decided to finance decommissioning projects of Unit 1 of INPP took place in Lithuania. Representatives from European Commission, the G-7 countries, international financial organizations participated in the conference. In 2001 the Ignalina International Decommissioning Support Fund (IIDSF) was established, administered by the European Bank of Reconstruction and Development (EBRD). IIDSF funds and/or co-funds chosen technical decommissioning projects and energy sector measures which are important for the final closure of INPP. 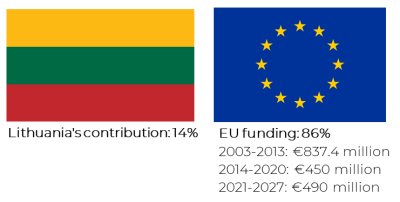