Technical specifications and operating principles of the INPP 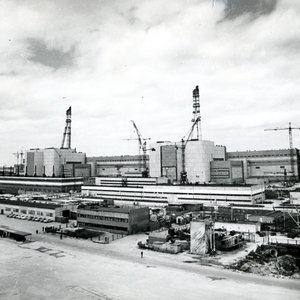 The Ignalina Nuclear Power Plant operated the RBMK-1500 water-cooled graphite-moderated channel-type power reactors, which were the world’s most powerful. The thermal power output of one unit was 4800 MW and its electrical power capacity was 1500 MW. After the Chernobyl accident the RBMK-1500 reactors were allowed to be operated with a thermal power output not exceeding 4200 MW. The Ignalina Nuclear Power Plant, like all plants with the reactors of the RBMK type, had a direct cycle configuration,  i.e.  saturated steam generated in the reactor proper as a result of light water passing through the reactor core was fed to the turbine at a pressure of 6.5 MPa. The light water circulated within a closed circuit. The INPP had two power-generating units, both with two turbines of 750 MW capacity each. Each generating unit was provided with a fuel handling system and  control room. The machine room, waste gas treatment and water conditioning rooms were common for both units.