Together with natural sources, there are artificial radiation sources related to nuclear technologies used in medicine, industry, energy. The individual doses that a person receives through technogenic sources are variable, although they are usually not high. The main part of exposure from technogenic sources is caused by medical procedures and methods of treatment that use radiation.

Important sources of ionizing radiation are nuclear energy and industry. Nuclear industry and energy enterprises are located in many countries and they constitute sources of technogenic exposure.

Radioactive emissions and discharges from nuclear power plants and nuclear industries are regulated by strict standards and therefore such emissions and discharges practically do not change the natural background and the content of radionuclides in the environment. According to the data of the Radiation Protection Center of the Republic of Lithuania, the impact of natural and artificial sources of ionizing radiation on the average annual exposure to the Lithuanian population is as follows (Fig. 1): 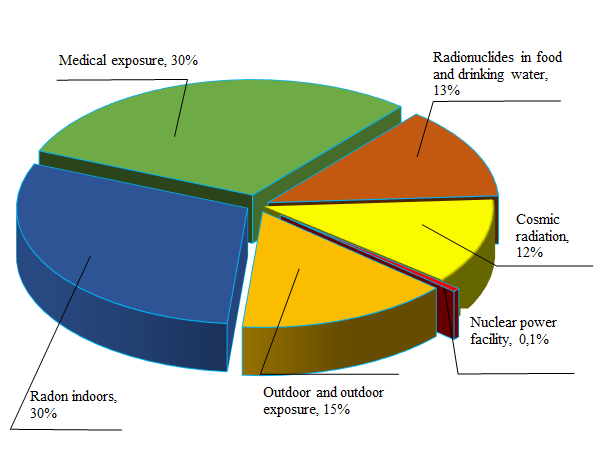 Fig. 1. Impact of natural and artificial sources of ionizing radiation on the average annual exposure to the Lithuanian population, %

Since 31 December 2009 Ignalina NPP has changed its activity from electricity producing to decommissioning, but has retained the status as an organization operating a nuclear power facility. Ignalina NPP remains as an enterprise working with nuclear fuel and radioactive waste, therefore its activities continue to be regulated by the Nuclear Energy, Radiation Safety, Radioactive Waste Management and other legal acts. In order to protect the environment and the population, the activity of the radionuclides released into air and Lake Drūkšiai is limited by the applicable requirements and norms in Lithuania.

In order to ensure that the activity of radionuclides emitted and discharged by Ignalina NPP is not exceeded, the radiological monitoring is performed continuously, as well as the sampling of air, precipitation, soil, vegetation, water (Lake Drūkšiai, drinking water, etc.), bottom sediments, food products (Lake Drūkšiai fish, meat, milk, cereals, cabbage, potatoes, mushrooms). These measurements are performed by qualified personnel of the Environmental Monitoring Laboratory. The laboratory is equipped with modern equipment and is accredited according to the international standard ISO/IEC 17025:2018 “General requirements for the competence of research, testing and calibration laboratories”.

During the monitoring, it has been identified that the emissions and discharges of radionuclides from Ignalina NPP do not exceed the permissible limits and make up a very small part (Figure 2). 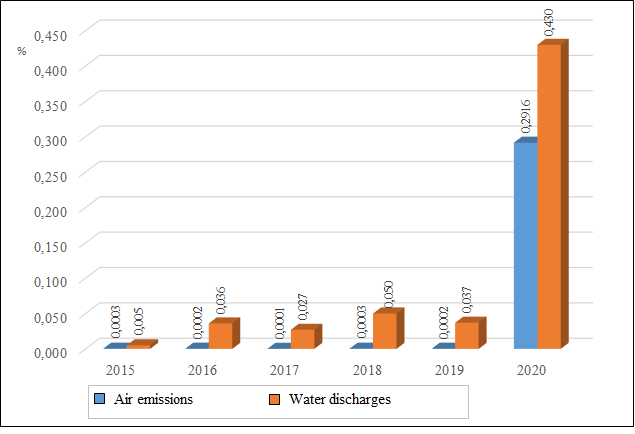 Fig. 2. Percentage of the limited annual dose of Ignalina NPP air emissions into air and discharges into water

One of the main indicators of the safe operation of Ignalina NPP is the annual effective exposure dose to the population, caused by emissions and discharges into the environment, and which shall not exceed 0.2 mSv (Lithuanian Hygiene Norm HN 73-2018).

The results of the monitoring show that the total estimated exposure dose to the population, caused by aerosol emissions and water discharges is 0.002 mSv (millisieverts) and amount to 1.0% of the annual constraint dose.

Exposure doses to the population are measured with thermoluminescent dosimeters, which are placed at various points of the Ignalina NPP sanitary protection zone and the observation zone. The dose rate is measured by 22 stationary Skylink system sensors. There are 12 sensors in the sanitary protection zone (within a radius of 3 km around INPP) and 10 sensors in the observation zone (within a radius of 30 km around INPP). The dose rate is monitored in real time via Skylink sensors. The real-time dose rate data are as follows:

Monitoring results show that the dose rate around the INPP territory varies within the range of 0.08–0.13 mkSv/h. 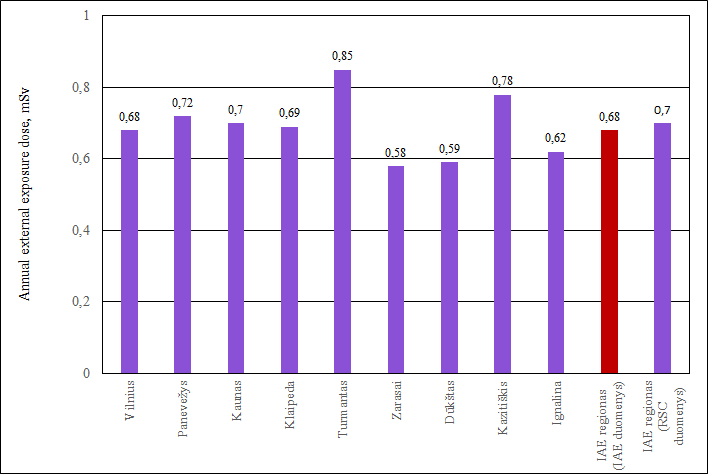 Fig. 3. Exposure doses from environment to the population of Ignalina NPP region and other regions in 2019

According to the Radiation Protection Center data for 2019 the average annual exposure dose in the INPP region was 0.70 mSv, in the Kupiškis region – 0.69 mSv. Kupiškis was chosen for comparison with other regions, as it does not have industrial enterprises and is located at a sufficient distance from the INPP. The results are similar to the monitoring results of studies in previous years and are consistent with the measurements carried out by INPP (Fig. 4). 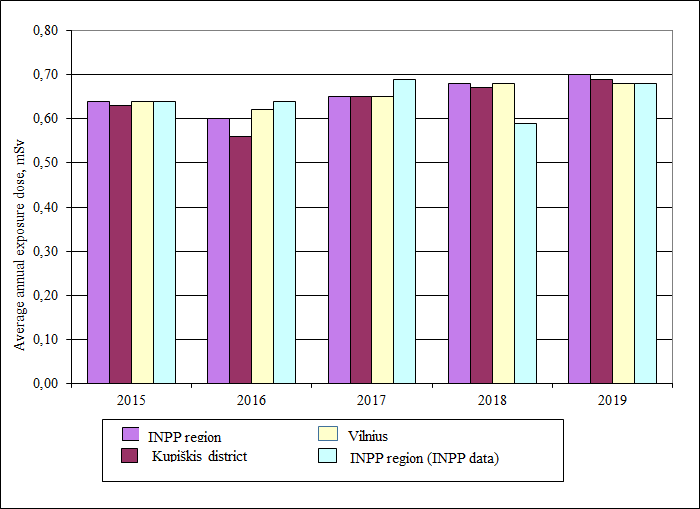 The best indicator of environmental contamination by radionuclides is monitoring the activity of nuclides in mushrooms and fish caught from Lake Drūkšiai, where the highest activity of the 137Cs radionuclide is found.

The average annual activity of 137Cs radionuclide in mushrooms in the INPP region (INPP data) and in territory of Lithuania (RSC data) is shown in Fig. 5. The annual effective exposure dose to the population of the INPP region, due to the 137Cs activity in mushrooms, was 5.3 × 10-4 mSv, and for the population of Lithuania – 17.5 × 10-4 mSv. The exposure dose was calculated conservatively: provided that 3 kg of mushrooms are consumed per year, excluding the part of the 137Cs activity that evaporates with the broth. 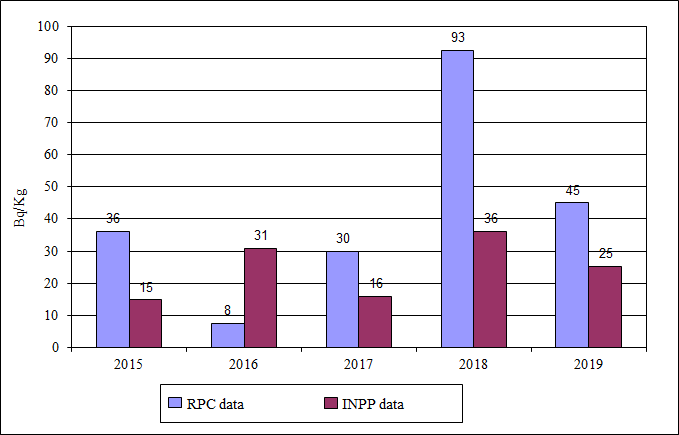 The activity of 137Cs radionuclide in fish from Lake Drūkšiai (INPP data) and the Lithuania regions (according to the RSC data, the fish were caught in Šiauliai region, Kaunas region, Panevėžys region) are shown in Fig. 6. 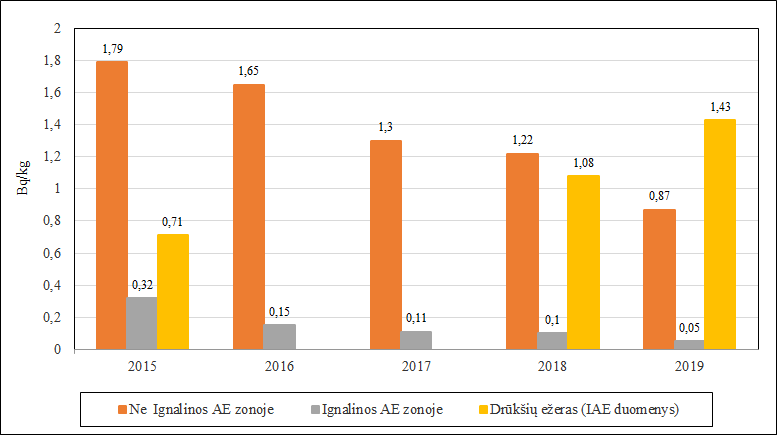 In 2019, the annual effective exposure dose to the population due to the activity of the 137Cs radionuclide in the fish of Lake Drūkšiai was 4.28 × 10-4 mSv (provided that 20 kg of fish are consumed per year).