Specific features of the RBMK reactors

The design of the Ignalina nuclear facility is one of the most advanced among those employing the RBMK reactors. In comparison with the Chernobyl NPP, the Ignalina NPP was more powerful, it had an upgraded Accident Confinement System and Emergency Reactor Cooling System. In terms of other parameters the Ignalina NPP is very similar to other NPPs employing RBMK reactors. The reactors of the Ignalina NPP could be classified as the Boiling Water Reactors. The coolant while flowing through the core is brought to the boil and partially evaporated. Past the core, the mixture of steam and water is conveyed to large separator drums installed over the core. Here the steam separated from water is delivered to turbines. The discharge steam is condensed, and the condensate is conveyed by the feed pump to the same separator drum where it mixes with the water previously separated from the steam. The main circulation pumps return the water to the core where it is again partially evaporated. This principal cycle is identical with the cycle of the Boiling Water Reactors widely used across the world. However, in comparison with the NPPs of Western countries employing BWRs, the Ignalina NPP like all other facilities operating the RBMK reactors has several peculiarities. RBMK reactors are of channel type, which means that each fuel assembly is located in a separately cooled fuel channel. In all, there were 1661 fuel channels in INPP. Prior to getting into the core the coolant needed to be evenly distributed among the same number of feeder pipes. Past the core, these pipes are brought together to feed the mixture of steam and water to separator drums.  The RBMK reactors belong to the thermal neutron reactor category. Due to the large number of metal pipes in the core the neutron properties of the reactor become poorer. To improve them, graphite is used in reactors of this type, which moderates (slows down) the fast fission neutrons and absorbs few of them. Fuel assemblies at the Ignalina NPP could be changed without discontinuing the operation of the facility. This is another advantage of the reactors of the channel type.

The Ignalina  NPP is a complex facility, and compared with facilities of other types  it has numerous other similarities and differences. The mean specific power per core volume of the RBMK reactor is very low in comparison with other types of reactors, which means that no damage will occur to the core for as long as several hours in case of complete or partial failure of electricity supply. This is a feature unique to the RBMK reactors. 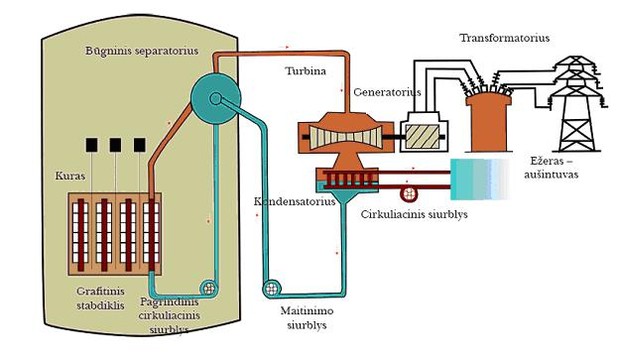