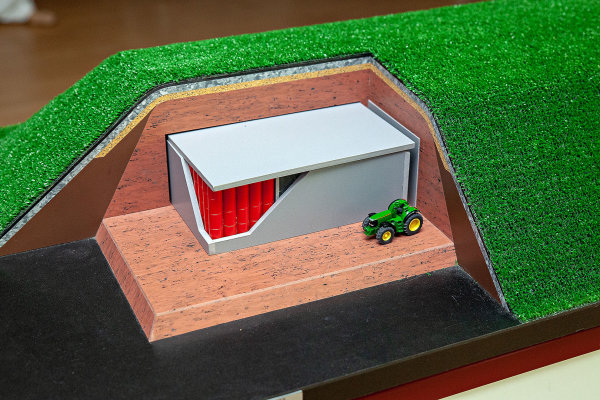 On 28 March 2020 a Tender for the „Procurement of Works for the Construction of the INPP Near Surface Repository for Low- and Intermediate-Level Short-Lived Radioactive Waste (Construction Stages I/A, II/A) and Design, Construction and Connection of the External Rainwater Drainage Networks to the INPP Infrastructure“ was re-announced.

The Near Surface Repository will be constructed at the Stabatiškės site in Visaginas municipality near other INPP radioactive waste management facilities. In 2007 the environmental impact assessment report of the surface landfill was prepared, coordinated with the state institutions and approved by the Ministry of Environment of the Republic of Lithuania, before which the report was publicly presented and discussed in the Lithuanian, Latvian and Belarusian societies. The INPP will carry out the construction of The Near Surface Repository, its operation and active supervison  for 100 years after its closure, will provide its physical security, and will also perform necessary maintenance works. During passive supervision (for a period of at least 200 years after the active maintenance period of a closed repository) the use of land will be limited on the territory of the repository.

The safety assessments performed at INPP have shown that such method of management of low and intermediate level short lived radioactive waste is reliable and complies with the best international practice. Such repositories are operated in many countries of the world where nuclear energy has been developed (Spain, France, Slovakia, the United Kingdom, Sweden, Russian Federation, Japan, the USA and other countries), and similar projects are currently being developed in Belgium, Lithuania and elsewhere.

INPP will start operating The Near Surface Repository after obtaining the permits of the State Nuclear Power Safety Inspectorate (lithuanian- VATESI) after proving that all technological equipment is working properly. This is planned to be done in 2024. Project B25-2 is funded by the European Union Ignalina Program.