During the INPP decommissioning and dismantling process, it is important to ensure the safety of the environment, humans and employees. For this reason, the major decommissioning objectives are: 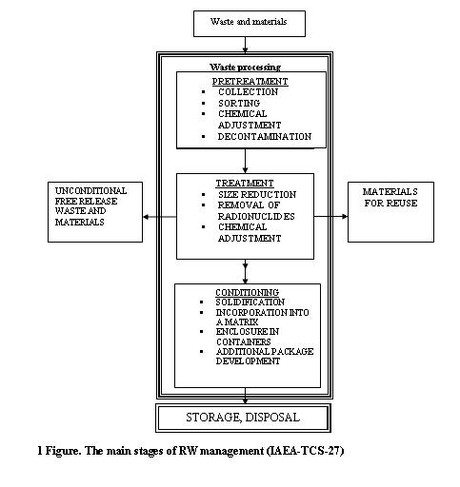 At present INPP solid radwaste generates during dismantling, operation, maintenance and modifications, while decontamination of the rooms and equipment of the power plant systems.

The solid waste amount is reduced by sorting of waste into radioactive, conditionally non-radioactive waste and materials.

Very low level waste is packed into plastic bags and sorted as combustible (paper, wood, plastics), which makes up 40 per cent, and incombustible (metals, concrete and other construction waste), which makes up 60 per cent. In solid waste transportation corridors the plastic bags are loaded into metal transport containers with a capacity of 3 m3 and taken to special storage facilities.

Low level, intermediate level and high level waste is loaded directly into containers wherever it forms. In 1995, a 70-ton press was put into operation that presses low level waste into 0.8 m3 packages weighing 600-700 kg.

RW of this type is kept in temporary storage facilities. 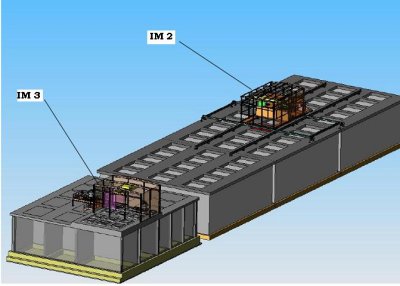 This kind of RW is loaded into metal transportation containers with a capacity of 0.7 m3 and for some time is stored in storage pools. Later on, it is taken away and placed into separate compartments of concrete ground storage facilities. Solid radioactive waste storage facilities with a total capacity of 28.93 thousand m3 is within the area of the INPP.

Long-Lived Intermediate Level RW is retained, crushed and transported to the operational temporary storage facility at the INPP site. With the completion of B2/3/4 project, this waste will be retrieved (B-2 project), transported to the B-3 building where it will be sorted, processed (combusted, pressed, cemented) and enclosed to the containers which later will be placed in the new storage facilities (B4). This will be temporaty storage until the final repositories are constructed (storage period up to 50 years).

The storage facilities are provided with special hoists, vehicles, a ventilation system that cleans exhaust air, vehicle and container washing equipment, special sewage facilities, and other things. Stores of combustible solid waste are equipped with automatic fire-extinguishing systems. Handling operations of intermediate and high level RW are performed remotely as the level of ionizing radiation dose rate is high.

Large amounts of radioactive liquids also form at the INPP. They consist of the drain from the primary coolant, decontamination liquids, laboratory waste, floor decontamination drains, water from showers and laundries, and liquids for the regeneration of ion exchange resins.

The amount of liquid radioactive waste is low comparably with other types of radioactive waste. Nevertheless due to its specific characteristics this waste requires special processing methods.

This liquid waste is collected in special tanks from where it is conveyed to evaporators. After additional treatment the condensate is returned to the production cycle. Radioactive concentrates of evaporators are collected in a 158/2 building of cement solidification facility.

This cementation project was implemented by the company AREVA in 2006. The possibility to restructure this storage facility into the final repository is being envisaged.

It is planned to process about 5 900 m3 of resin, perlite and sediments accumulated during the INPP operation and decommissioning.

It is also assumed that there will be about 130 000 m3 of solid radioactive waste generated during the INPP operation and decommissioning.

At the new Solid Waste Management and Storage Facilities (SWMSF) solid radioactive waste will be retrieved from the interim storage facilities which already exist at the enterprise site and the waste generated anew will be sorted, treated (incinerated, compacted or grouted) and packed. All this waste will be placed in the new interim storage facilities. The facilities will be operated for 50 years in total: waste treatment will last for 30 years, its storage will last for 50 years. It is planned to start operating the facilities at the end of 2011. The facilities of the same type are already in operation at Bohunice NPP (Slovakia), Balakovo NPP (Russia) and in Karlsruhe (Germany), the facilities are under construction at Leningrad NPP and Chernobyl NPP.

In the future waste will be transported for unlimited use (which contamination level does not exceed the uncontrolled waste contamination level) and contaminated waste will be disposed of in the Near-Surface Repository for Very-Low Level Short-Lived Radioactive Waste or temporary stored at the power plant site until the necessary repositories are constructed (near-surface and deep geological repositories).

The facilities will be constructed for the disposal of Very Low, Low and Intermediate Level Short-Lived Radioactive Waste at the INPP site:

It will be a trench-type near surface facility consisting of:

Thus, at the beginning the containers with waste will be stored in the buffer storage facility and then, after it has been completely filled, all containers will be transferred to the module for disposal within the scope of one operation.

The radiation monitoring system will be implemented at the facility. The facility of this type is already operated at Oskarshamn Nuclear Power Plant (Sweden).

When INPP runs out of the waste of this type, the buffer storage facility will be dismantled.

Over a period of 20-25 years the packages with low- and intermediate-level short-lived waste will be transported to the concrete compartments of the repository. The filled and sealed repository will resemble a barrow. Besides the concrete the packages will be protected by a multilayer waterproof covering resistant to environmental effects (dense clay, soil, etc.). It is planned to start operating the first facilities of the repository in 2017.

After the entire repository has been filled and finally sealed, the operating organization – Radioactive Waste Management Agency (RATA) – will carry out active surveillance during the first 100 years. For the next 200 years (during the passive surveillance) the use of land in the repository area will be limited. The similar repositories already exist in Spain (El Cabril repository) and France (Centre L‘Aube).

After termination of the INPP empty rooms decontamination and structures dismantling, 965 000 m3 of concrete and 190 000 tons of steel will be generated which contamination with radionuclides do not exceed free release level. Such material will be transported to the landfill or reused without application of radiation safety requirements. Such waste management is efficient economically as well as on environment protection viewpoint.

Safety measures are established for each stage of radioactive waste management.

Waste and materials of all types which are generated during the INPP decommissioning will be recorded, monitored and managed through the waste management module which is an integrated part of the system.

Monitoring of waste amounts and activity is the major target of waste management. All the materials, equipment and facilities which are being dismantled will be permanently recorded and documented during decommissioning.