General information about the Project

A purpose of B19 Project is to construct infrastructure for final disposal of very low level radioactive waste.

B19 Project consists of two sub-projects for construction two structures:

Buffer Storage – temporary, roofed, radioactive waste accumulating structure, that serves as interim Storage and occupies area of 0,2 ha. The Facility is equipped with a waste characterization unit and all other necessary means (software and hardware, handling and transportation equipment). After the Storage gets full of waste, Landfill disposal campaign will be organized. 15 campaigns are planned, each of disposal of 4000 m3 capacity packages with very low level radioactive waste Waste Disposal Modules  – ferroconcrete base-slab (foundation plate) with rainwater collection system installed, that serves as monitoring mean and controls water pollution every time before discharge, although Design foresees no exceeding of permittable limits of pollution. Main waste packages, that are planned to be disposed over the base-slab, are half-height ISO containers, plastic bales, flexible plastic containers (FIBC package). The packages will be placed on the stepped structure to form a roughly “hill shaped” stack, which will then be covered by layers of different natural and fabricated materials to achieve a smooth, hill-shaped form. Finally, hydro-isolation, drainage and protective layers will be laid on top to prevent water penetration into the waste stack and washout of radionuclides from the waste to the environment. Modules will occupy 4,4 ha area.

Landfills of this type have been already put into operation in Oskarshamn, Forsmark and Ringhals nuclear power plants in Sweden. The Swedish conceptual model of “Landfill” type repositories has been adapted during preparation of design solutions for INPP. INPP personnel, responsible for implementation of the Project and Landfill operation, took classes in aspects of Landfill repository construction and operation in Sweden.

Analogical purpose Repositories for final handling of very low level radioactive waste, however having certain structural specifics, had been constructed and are being operated in many European countries, such as France, Spain, UK and others. This way of handling is sustainable and does not burden future generation. Territory of repository will be suitable for unconditional use after certain period of waste disposal, because very low level radioactive waste is short-lived. 100 years of restrained usage of the territory has been determined and justified currently.

Progress of Project B19

Construction permission for Buffer Storage (B19-1) was given on 9th April 2010. Construction works systems installation had been completed in September 2011.

“Hot” tests Programme was agreed with VATESI on 4th January 2012.

On 16th July 2012 VATESI approved a report of complex ‘hot” tests of Biffare Storage and concluded, that the Storage meets Design requirements and requirements of nuclear, radiation and physical safety.

INPP had been granted with Storage operation license by VATESI on 16th May 2013.

On 30th May 2013 INPP had been given a permission for industrial operation of the Storage.

In August 2009 a Technical Design of Waste Disposal Modules and preliminary safety assessment report were agreed by INPP and the documents were sent for expertise to responsible institutions.

The special expertise of the Technical Design and preliminary safety assessment report were completed on 12th October 2010.

The Design was given for general expertise on 10th December 2010.

The general expertise was completed on 26th October 2011 and the design was submitted for approval to responsible institutions.

The Technical Design was adjusted during preparation and approval, because of changes of requirements for nuclear structures and conditions of connection of Repository facilities to existing engineering networks of INPP. Lithuanian State institutions approved the adjusted Design in August 2015. 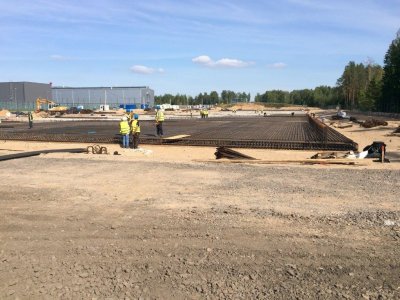 Repository general construction works have been performed in 2017 – 2019.