Storage Facility is designed for acceptance and storage of bituminised RW. Pursuant to the BSR-3.1.2-2017, bituminised RW are attributed to “B” and “C” classes of RW, i.e., short-lived low and intermediate level RW to be placed to the near-surface repository.

Drained water and sewage from technological (process) building of INPP (Unit 1 and Unit 2, specialised laundries, etc.) are collected and stored in the drain water, liquid operational waste and emergency drain water suction and storage tanks, installed in buildings 151, 154. Water from drain water tanks in building 151 is supplied to one of the two interconnected evaporators, installed in building 150, which, as it has been already mentioned, include bituminisation facilities. Water in the evaporator is evaporated until the salt concentration

reaches 130 g/l. Then concentrate undergoes additional concentration in the re-evaporation unit up to 360-390 g/l salt concentration. Concentrate (concentrated LRW or stillage residue) from this evaporation facility is supplied to one of the two bituminisation facilities of extruder type where it is being mixed with bitumen and transferred to the preliminary selected canyon of the Storage facility via bitumen compound transportation and discharge to canyons system. 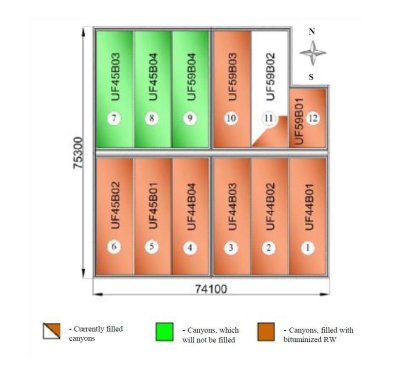 The purpose of the project is to confirm the feasibility of converting the existing Bituminised Waste Storage Facility into a repository, to prepare a technical design and relevant supporting safety documentation for so doing and to perform engineering and relevant upgrading works.

Project will be performed in 2 phases:

1. Design phase:
- Additional geological and hydrogeological investigations of soils in the vicinity of the storage facility and depending on the results a decision will be taken on the possibility of converting the bituminous waste storage facility into a repository and the Concept of Repository will be developed. Following the approval Concept of the Repository with VATESI, Environmental impact assessment (EIA), technical design and preliminary safety analysis report (SAR) will be developed.

In this case, separate project will be initiated to retrieve the bituminised RW.

2. Construction works phase:
- Preparation of detail design documentation, further engineering barriers construction works and relevant upgrading works. The Contract of the project Ist stage signed with Contractor, came into force on 4th October 2018.
Contractor: JSC Svertas Group. Contractor performed geological and hydrogeological investigations of soils in the vicinity of the storage facility and expertise of the storage facility.
Value of the Project: The value of the design phase is 1.2 MEUR. The total estimated cost of completing the entire B20 project according to the FDP is 5.54 MEUR.

The construction of the repository's engineering barriers will be subject to a separate contract.

The date of the repository construction Ist phase finish is planned on 2027.

The final converting of the bituminised waste Storage Facility into repository and finalisation of engineering barriers construction works is planned when neighbourhood buildings will be demolished. Oriented date on 2035.

Project B20 are funding from European Commission and administered by the Central Project Management Agency (CPMA).