B25 project. Near Surface Repository for Low and Intermediate Level Short-lived Radioactive Waste 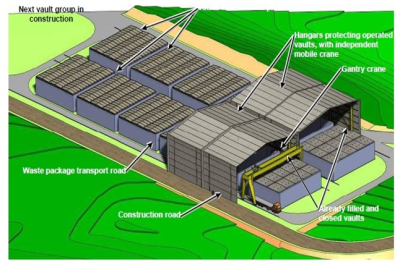 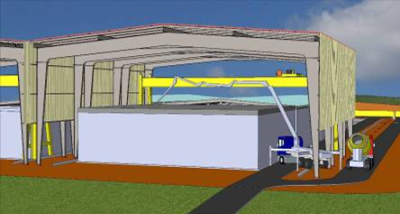 The first phase of the project on near surface repository, started in 2000 between the Ministry of Economy of Lithuania as the partner on the one side and Swedish consortium SKB-SWECO International-Westinghouse Atom as the main contractor on the other side, was the development of the general concept on near surface repository acceptable for Lithuania. Considering a geological situation in Lithuania, it was recommended to use a structure on the surface. As a result of the further researches the concept of the modular raised type has been chosen as preferable. Considering positive results of the international independent check of the concept, it was accepted as a basis for development of a near surface repository in Lithuania in 2002. In this case it is supposed that the repository will be constructed on the ground surface forming an elevation. The concept of the repository is based on the system of barriers of a natural (geological) origin and engineering artificial (designed) barriers (multiple barriers concept) for prevention or considerable deceleration of radionuclides migration into the biosphere.

In May 2007 national Radioactive Waste Management Agency RATA released the near surface repository Environmental Impact Assessment Report for three selected sites - Galilauke, Apvardai or Stabatiškė, which was agreed with the state institutions and approved by the Ministry of Environment. Then in November 2007 the Government approved the proposal of the Ministry of Economy to allow INPP designing of a near surface repository for low and intermediate level radioactive waste within the territory of village Stabatiškė of Visaginas Municipality.

According to the prepared Technical Project, 36 reinforced concrete vaults are planned for  final disposal of 100 000 m3 of final packaging of radioactive waste (concrete containers with cemented radioactive waste. The repository, its protective areas and auxiliary structures required for operation will occupy the area of about 45 hectares. Since waste will be disposed for a long time (about 20 years), the repository will be divided into three groups of vaults (12 vaults per group) in order not to build all vaults at the same time. First of all, only one group of vaults will be constructed. The construction of the third group of vaults will be decided at a later stage of INPP decommissioning. 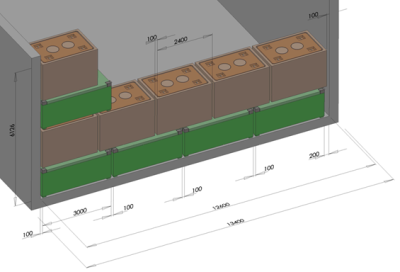 The repository operation will include transportation of radioactive waste packages from the Ignalina NPP, their acceptance, check of conformity to acceptance criteria, formation, storage of final packages in a buffer storage facility,direct placement of waste packages in the disposal area, storage of cemented packages in a buffer storage facility, filling of the free space between containers with concrete solution. A mobile portable shed will be installed above an operated vault intended for protection of the vault being loaded and used equipment for radioactive waste packages management from direct impact of environment. A remotely operated bridge crane will be mounted under a portable shed, which will move radioactive waste packages. Lighting, supervision systems, etc. will be fixed to a portable shed. After the vault is completely filled with packages, the portable shed will be moved over the next vault. Above all vaults, it is planned to install temporary roofs designed to protect structures from precipitation before and after they are filled with containers.

All physical protection measures will be stipulated in the design for prevention of unauthorized actions realization by the persons, which can threaten the repository safety. The level of security arrangements will be established taking into consideration a potential possibility of the repository or radioactive waste damage.

Components of the disposal system

Radioactive waste will be stored in the repository until 2038, until all INPP decommissioning works have been completed and all radioactive waste treatment has been finished. After the group of vaults is filled with the radioactive waste packages, engineering barriers (several layers of clay, gravel, sand, pebble, vegetative ground) will be installed over it, the total thickness of which will be about 7 meters.

The main function of engineering barriers is to prevent penetration of water into the vaults and thus minimize the process of movement of radionuclides from the repository.

After the repository closure the monitoring programme will be carried out, which stipulates radiation and other monitoring of the repository and the site surrounding it with the purpose of check of unacceptable radiation impact absence and confirmation that functional parameters of the isolation system correspond to project parameters.

In December 2008 the Technical specification on development of the Technical Design (hereafter TD), Safety Analysis Report (hereafter SAR) for the Near Surface Repository and the Environment Monitoring Programme were agreed with VATESI.

Project B25 will be implemented in two stages:

1-st stage - Researches of geological structures and their characteristics, researches of hydro-geological and geotechnical properties of the site soils, development of TD, SAR and Repository Monitoring Programme (project В25-1). This stage was completed in 2017.

2-nd stage - development of the Detailed Design, completion of required licensing procedures and construction of the repository (project В25-2).

Implementation Process of the 1-st stage of Project

Within the period of 2010-2012 the Contractor performed the works on research of geological, hydro-geological and tectonic characteristics of the site, which consisted of the following 3 stages, for demonstration of the site Stabatiškė suitability for a near surface repository construction:

The characterization stage included all necessary works and laboratory tests to analyze the data existing at that moment and to establish general soil characteristics and properties of geological parameters of the site;

The site suitability confirmation stage was continued by assessment of the site basically having focused on hydro-geological and hydrological researches to provide all necessary information for technical support at designing and demonstration of disposal vaults, main and auxiliary structures (technological and administrative) and safety demonstration;

In August 2011 the Contractor presented the “Report on the Variants of Basic Design Solutions for the Near Surface Repository”. The main purpose of this report was to propose the optimal engineering technical solutions basically from the point of view of safety of repository impact on the environment, personnel and public proceeding from the international operation experience of similar type of repositories in other countries, as well as the experience of the French partners of the contractor (AREVA-TA, ANDRA). The report was agreed with INPP in May, 2012.

The report on confirmation of site Stabatiškė suitability for the repository designing on the basis of the selected technical solutions was presented by the Contractor in September 2011. In this report the analysis of the engineering-geological, hydro-geological and tectonic researches data is presented and a conclusion that site Stabatiškė is suitable for construction of the near surface repository. The report was approved by INPP in February 2012.

In July 2012 the Contractor provided the outline engineering design (Basic Engineering Design) for review, the objective of which is presentation of the basic characteristics of planned structures from the point of view of operational parameters, technology, radioactive waste characteristics, general plan, transport logistics, analysis of operational safety and safety after the repository closure. In June 2013 the report “Basic Engineering Design” was approved by INPP.

In December 2014 the Contractor provided the Technical Design, PSAR and the Environment Monitoring Programme for agreement. After comments elimination the updated versions of documents were approved by INPP in August, 2015.

The general expertise of the Technical Design took place in July-October 2015, basing on the results of which (after comments elimination by the Contractor) in October 2015 the Act with the recommendation to agree TD was received.

In 2015 TDD was approved by:
State Energy Inspectorate under the Ministry of Energy the Republic of Lithuania;
Utena Public Health Center, Zarasai branch.

In April 2017 TDD/PSAR was approved by Lithuanian Geological Survey under the Ministry of the Environment and VATESI.

The 1st stage of the Project was completed.

22 May 2017, the State Territorial Planning and Construction Inspectorate under the Ministry of Environment issued a permit for the construction of the repository B25.

4 July 2017 - The EC agreed on the NSR.02 project funding procedures (Construction of a near-surface repository).

22 November 2017 - VATESI issued a license to INPP for the construction and operation of a near-surface repository.

In 2018  preparation and agreement of the following Technical Specifications and other procurement documents with the CPMA were carried out:

- Procurement of Works for the Construction of the INPP Near Surface Repository for Low- and Intermediate-Level Short-Lived Radioactive Waste (Construction Stages I/A, II/A) and Design, Construction and Connection of the External Rainwater Drainage Networks to the INPP Infrastructure;

On 3 August 2018 a Tender was announced for the procurement of Works for the Construction Technical Supervision and FIDIC Engineer and Consultancy Services for the INPP Near-surface Repository for Low and Intermediate Level Short-lived Radioactive Waste (I/A, II/A construction stages) and its External Rainwater Drainage Networks.

On 31 January 2019 a Tender was announced for the procurement of KTZ-3.6 containers. In August 2019 the winner of the Tender has been announced.

On 14 March 2019 a Tender for the „Procurement of Works for the Construction of the INPP Near Surface Repository for Low- and Intermediate-Level Short-Lived Radioactive Waste (Construction Stages I/A, II/A) and Design, Construction and Connection of the External Rainwater Drainage Networks to the INPP Infrastructure“ was announced.

On 30 October 2019 the Contract for „Construction Technical Supervision and FIDIC Engineer and Consultancy Services for the INPP Near-surface Repository for Low and Intermediate Level Short-lived Radioactive Waste (I/A, II/A construction stages) and its External Rainwater Drainage Networks” was signed with the CJSC Kelvista.

On 28 March 2020 a Tender for the „Procurement of Works for the Construction of the INPP Near Surface Repository for Low- and Intermediate-Level Short-Lived Radioactive Waste (Construction Stages I/A, II/A) and Design, Construction and Connection of the External Rainwater Drainage Networks to the INPP Infrastructure“ was re-announced.

June 2020, the procurement ended without a contract since all submitted bids exceeded the planned budget.

July-October 2020, recalculation of the estimated part of the technical construction project cost (a budget), a new budget was agreed with CPMA, and a new procurement was announced.

June 2021, a vendor's bid was rejected, resulting in a suspension of the procurement process after legal action was initiated.

January 2022, the INPP wins the court, procurement procedures are resumed.

June 2022, procurement procedure ends without a contract on account of supplier, who did not extend the deadline for bids due to higher construction prices

A new procurement is planned to be announced in October 2022.

Implementation of the 2-nd stage of Project

According to Project B25, the completion of construction works is planned in 2027, and the start of operation in 2028-2029. This Project includes the procurement of services for the construction of a technological road, the installation of electrical and telecommunications, the procurement of special vehicles and other services of lower cost to be provided at different stages of the Project.

On 24 October 2022, an open tender was announced "Procurement of Works for the Construction of the INPP Near Surface Repository for Low- and Intermediate-Level Short-Lived Radioactive Waste (Construction Stages I/A, II/A)"

On 3 February 2023, deadline for accepting offers or requests to participate